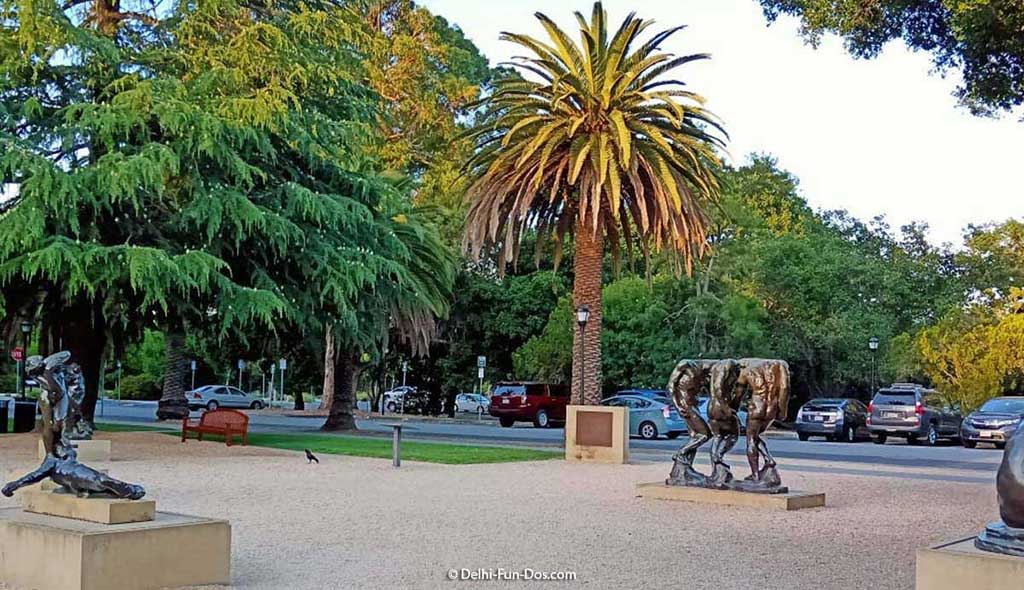 What is California weather like year round? Given that California weather is pleasant to moderately cold (read – no snow), it is a great place in the USA to be outdoor any time of the year. You can visit the mountains, beaches, wineries, farmer’s markets and umpteen flea markets in this area. You can go visit an ostrich farm and a town that still moves on horse carriages. Or you can check out the sculptures at The Cantor Arts Center which is the custodian to the Stanford University Arts Collection, definitely one among the hidden gems in California.

We have realised there is art in every little good work you do. In other words, there is art in life. While visiting the city of San Francisco, we saw umpteen art objects placed at various places in the city. Out in the open, they are for everybody’s pleasure. These pieces comprise classical statues of famous people, statues connected with the Christian religion, angels and cherubs, and contemporary pieces either realistic or abstract. These pieces not only play the role of beautification of the city but also make everyone notice art as a way of life.

There are many art parks and sculpture gardens in the Bay Area and we were fortunate to see a few of these. These pieces of art punctuated the greenery that is in abundance in this part of the US. The placement of the artwork was such that they seemed spontaneous or organic and there was no imposing on the surroundings. Any effort to beautifying a space was subtle and seemed secondary. This little piece is about The Cantor Arts Center that we drove through.

While driving through the university campus, or, neighbourhood, we were surprised to see the beautiful pieces of sculpture on various spots. These looked very mystical from afar, and we parked and were almost drawn to these statues.

The lawns surrounding the Canter Arts Centre had many stark artworks on display. Most of these artworks were bronze cast human figures that conveyed confidence that was ethereal. The statues were such that we were motivated to explore the surrounding areas that were accessible and reached the Memorial Court and were stunned. We had an experience we never thought we would have in our lives!

The Memorial Court is a walled area courtyard that is known for its rose gardens. But our jaws dropped when we spotted the collection of statues that seemed they would come to life any minute. These were bronze cast statues of six men who had the deepest expressions sculpted on them. They had an eerie quality about them as if they were trying to say a lot. One did not need any background to realise they were witnessing a masterpiece. A plaque mentioned that this collection was Burghers of Calais by Auguste Rodin!

Auguste Rodin is a French sculptor from the 18th century. He is considered to be the founder of modern sculpting. His most famous statues include The Thinker and Burghers of Calais. Both these statues are part of Stanford Art collection. Some of his works were displayed at Indian Museum, Kolkata decades back and many excited enthusiasts travelled from all over the country to see The Thinker. The Thinker was housed inside a museum that was closed under corona lockdown and so we could not see that. However, we were ecstatic to see Burghers of Calais, a famous work by the legend Rodin.

On reading up, we came to know that The Burghers of Calais depicted freedom from oppression. During the siege of the French city of Calais in the year 1347, the Burghers formed by 6 eminent citizens of Calais volunteered to sacrifice their lives if the oppressor Edward spared the others in the town. The story does give us goosebumps.

We also visited the Stanford Memorial Church located at the main quadrilateral of the university. The outer façade made of sandstone is decorated the most exquisite mosaic work one can imagine. It displays stories from the Bible and we could identify Jesus giving a sermon as the main theme. The mosaic work was of unimaginable skill that the whole fresco looked like a painting even from little distance. Little facial expressions had been brought to life by assembling mosaic pieces. We just looked and looked till our eyes could not bear it any more. The stained glass windows, which we saw only from outside, also depicted beautiful religious themes. The church was closed but we were not disappointed. We were content with the subtle grandeur of art that we witnessed here.

We later came to know that Stanford Memorial Church was built in the year 1903 and was addressed as Stanford University’s Crown Jewel.

The art that we saw at Stanford was a cusp of classical with modern. It stunned. And yet it made us introspect about life. That is the ultimate purpose of any successful piece of work. It is relatable in some manner to life.

Looking back, this post is replete with gratitude. We are still filled with awe and humility that we almost ran into such magnificent artwork, so unprepared yet so satiated. The unplanned Stanford art tour became the “Crown Jewel” of our trip to USA.