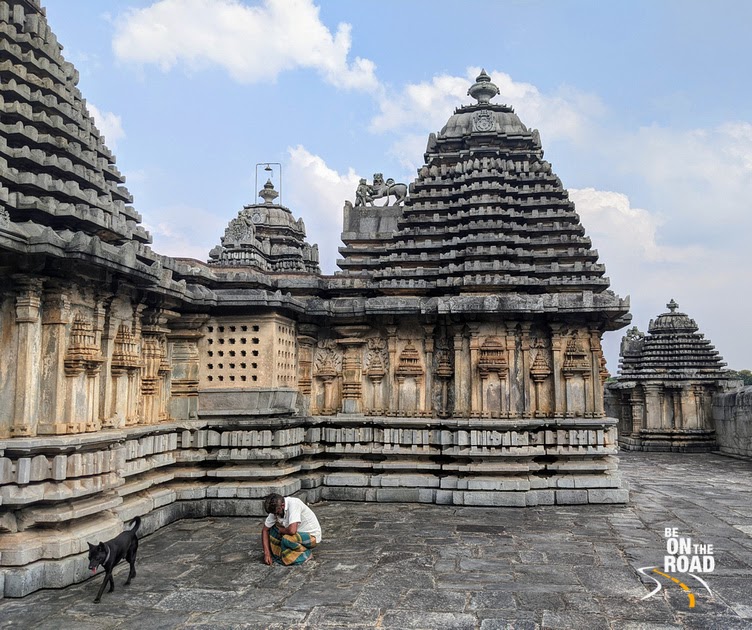 This early 12th century soapstone temple happens to be one of the earliest known temples built in the Hoysala era. It is the only chatushkuta (four shrines) temple built by the Hoysala dynasty. It was the first grand temple dedicated to goddess Lakshmi in the South of India. There are many architectural aspects to it that are unique to this temple only and not found in any of the other Hoysala temples. I am talking about the architectural beauty called Lakshmi Devi temple that is located in the village of Doddagaddavalli.

Located somewhere between Belur and Hassan, the Lakshmi Devi temple at Doddagaddvalli is a rural holiday gem set amidst a sleepy village, coconut plantations and a lake. Many things about this temple are unique. It doesn’t have a jagati or raised platform that is common with other Hoysala temples. It has a combination of Kadamba and Dravidian shikharas. It has 4 shrines. And unlike the other Hoysala temples, it lacks ornate sculptures and intricate carvings. From a Hoysala perspective, it is a rather simple temple. May be, the architects started practicing their craft here.

As you enter the temple premises, you pass through a small hall with lathe turned pillars before you step into a courtyard with multiple shikharas showcasing Hoysala emblems. As you approach the door to this chatushkuta, you will see two large sculptures of females with intricate jewellery.

If you continue to look up flashing a torchlight at the ceiling, you will see the different Vaastu devatas at different directions that they are lord of. You will see Kubera and Rambha on a horse in the north direction, Agni riding on a one horned ram and holding his weapon Shakti in the south-east direction, Yama riding his buffalo and holding his danda in the South, Goddess Niruti in her human form in the south-west, and Varuna riding a crocodile in the West. In the center of the hall, you will also notice Lord Indra with his consort Indrani on his Airavat elephant.

In the main shrine, goddess Lakshmi, facing East, holds a conch in her upper right hand, a chakra in her upper left hand, a rosary in her lower right and a mace in her lower left hand. There are female attendants on both her sides. And right opposite her shrine is the shrine of Lord Shiva as Bhootanatha with his sons Karthik (Subramanya) and Ganesh on his either side. This shrine to Lord Shiva also makes it a rare Hoysala temple that has shrines to both Lord Shiva and Lord Vishnu and their respective consorts.

Overall, the Lakshmi Devi temple at Doddagaddavalli is an architectural gem from the Hoysala era and is a must visit on your Hoysala temple trail. Its offbeat nature, beautiful rustic setting and unique design elements make it a top destination on the Hoysala temple trail. I absolutely love this temple and would recommend it within a heartbeat. Do remember to carry a good flashlight with you to appreciate the carvings on the ceiling.

Guide services for the temple:

If you wish to know the rich history of the Lakshmi devi temple at Doddagaddavalli, it is best to hire a government guide from Belur or Halebid and bring him over here. If you are staying at Hoysala village resort, you can also hire their in-house travel guide.

In case you don’t have access to any guide, it is best to read up a bit on the internet about this temple and ask the ASI caretaker at the temple campus to show you around and share his knowledge with you. You might want to tip the caretaker for his services.

There are 2 different routes by road to approach the temple:

The nearest railway station would be Hassan.

The nearest airport would be Mangalore airport, but the one with the best connectivity would be Bangalore international airport.

The Lakshmi devi temple at Doddagaddavalli opens at 8 AM and closes at 6 PM. The ASI caretaker / security guard / farmer stays close by. Do give a look around and shout out if you find the premises locked. This ASI caretaker will also double up as your guide in case you do not have one or you wish to know more about this beautiful temple.

The priest visits the temple in the early hours of the morning to perform the daily puja. Do get his number in advance in case you wish to offer archana or wish to watch the daily puja.

If you wish for close proximity and something cheap, there are a lot of budget hotels in and around Belur and Halebid.

If you want something luxurious, look up the Hoysala village resort between Belur and Hassan.

If you wish to stay amidst coffee estates and pristine nature, look up the homestays, hotels and resorts located in Chickamagaluru. Some of these would be farm stays or plantation stays.

You can hardly find anything to eat at Doddagaddavalli. If you seek a decent hotel or a restaurant, head to Belur or Halebid

If you want high quality dining with good washrooms and ample parking space, I would recommend that you visit Hoysala village resort that is located between Belur and Hassan.

If you wish to dine amidst nature, look up the restaurants in and around Chickmagalur.

Other offbeat Hoysala temples nearby:

2) The hill station and coffee estates of Chickamagaluru

3) The wide Hemagiri falls on the Hemavati reservoir

6) The hill station of Kemmangundi

12) Bhadra tiger reserve that is known for its river terns, tigers and leopards