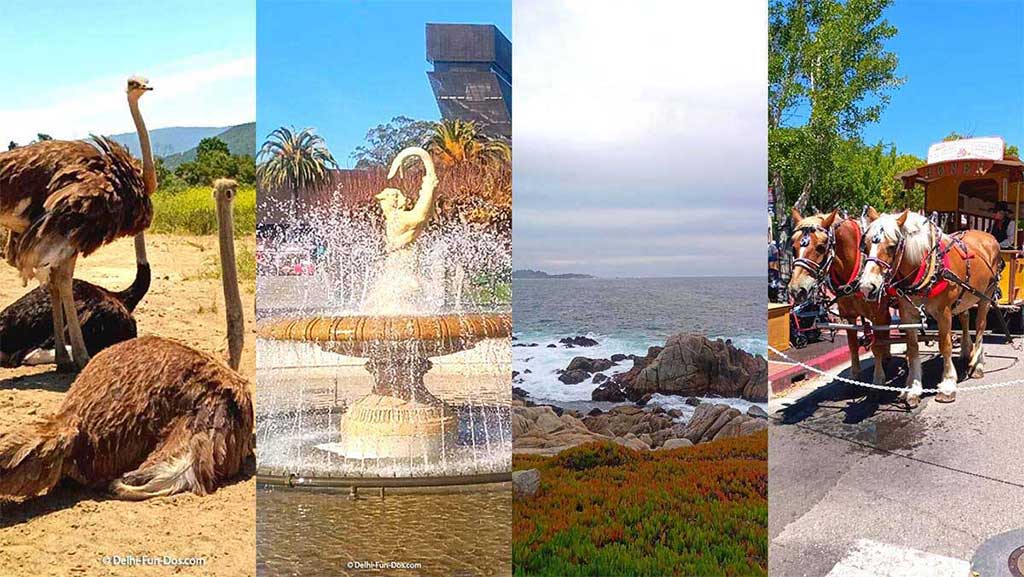 Where is Hollywood? Hollywood is in California, a state in the United States of America. That was not so tough. This state enjoys beautiful weather and California tourist attractions draw visitors from across the world round the year. The city of San Francisco in California advocates a free-living ethos. Moreover, in addition to Hollywood, the tourist map of California includes Disneyland, Universal Studios, Golden Gate Bridge, Napa Wine Valley and so on.

This piece is about lesser-known places in California. If you are in this part of the world, do take some time out for offbeat places to visit in California. When we visited these sites, our jaws dropped and we felt, our journey all the way from India would have remained rather incomplete if we had not visited them. Below is a short guide to such hidden gems of California.

We were driving back from Los Angeles to Cupertino and stopped for the night in a place that looked like a page from a fairytale. This happened to be Solvang, a Dutch town that has maintained its vintage traditions. Brick houses with flower box windows and gingham curtains, windmills and horse-drawn carriages, Danish pastries and quaint ice-cream shops, this was how Solvang looked. The place fell asleep by 6 in the evening as people would do in the days of yore. We are lucky that we reached this enchanting town, warped in time, by mere chance and could see it for real!

Solvang had another surprise for us – Ostrichland. This was a ranch that bred ostriches and emus and they were kept in open spaces with a wired fence. Set against the Santa Ynez Mountains, Ostrichland was open to visitors. We went in and fed the birds from designated spaces in their pen. We also looked at ostrich eggs and memorabilia on sale at the souvenir shop and took pictures in front of ostrich themed background. Kids and adults alike could have a most fascinating time here. Given that this was our first visit to an ostrich farm, we made a memory for a lifetime.

Most tourists visit the famous Golden Gate Bridge and Bedabrata has the ritualistic picture with the bridge in the background. But we also visited the sprawling Golden Gate Park in San Francisco, but not very near the bridge. Established in 1895, it’s a huge open space with mindboggling sculptures, art museum, a grand amphitheatre, Japanese Tea Garden etc. Given the huge expanse and the host of interesting places in the Golden Gate Park, you could easily spend a full day out in the open and not mind that even once!

The renowned Stanford University is located in the California Bay Area. They have a rich collection of sculpture that is on display in the University campus as well as the Stanford Art Centre. We were surprised the find the renowned series of human figures – Burghers of Calais by Rodin here. The French sculptor Auguste Rodin is considered to be the pioneer of the modern school of sculpture. This was the first time we saw his work in real, and it gave us goosebumps. Now we know why Rodin deserves every bit of adulation he receives more than a century after his time.

Pebble Beach is located in the Monterey Country of California is a sparkling shoreline on the Pacific Ocean. The golden sand on the beach is spotlessly clean. But what amazed us was the sparkling blue-green hue of the water. It looked like a skillful painter had poured giant buckets of teal and green paint in the ocean for achieving this amazing colour. The waves were low and we stood on the beach almost transfixed at this splendour of nature. Pebble Beach is also popular for its golf courses, apparently some of the best in the world. Since the water is cold, people do not swim in the ocean much, but surfing is a popular activity here.

If you are at Pebble Beach, you can’t miss the Lone Cypress in the vicinity. It is a single Monterey cypress tree that stands alone on a cliff jutting into the ocean. The tree is approximately 250 years old and makes a poignant statement. We felt it was symbolic of how we stand alone at times, not compromising on our values or pride. The Lone Cypress is a photographer’s delight and is apparently one of the most clicked trees of the world. We also got a photo clicked with the artistic Lone Cypress on the background. The sturdy cypress trees are found mostly in Southern California.

Carmel town, an abbreviation of the full name Carmel-by-the-Sea, is a posh town in Monterey County. Historically, Carmel was a hub of folks pursuing arts and aesthetics. No wonder, it had beautiful houses and stores reflecting an epicurean approach to life. We walked around the streets and visited some cafes. It was Christmas time and the place was illuminated with fairy lights. It seemed as if we were the cast of a Hollywood movie based on time-travel. Carmel is also popular for the grand Carmel Mission and Museum of History. Again, Carmel-by-the-Sea has all the makings of being a memorable day trip.

We are blessed that we could unravel some of the best-kept secrets of California. These places were not overflowing with tourists and we could absorb so much more. If we come across more such places, we shall add to this list. Do keep visiting and if you have any suggestions vis-à-vis offbeat places in California, do leave a comment.