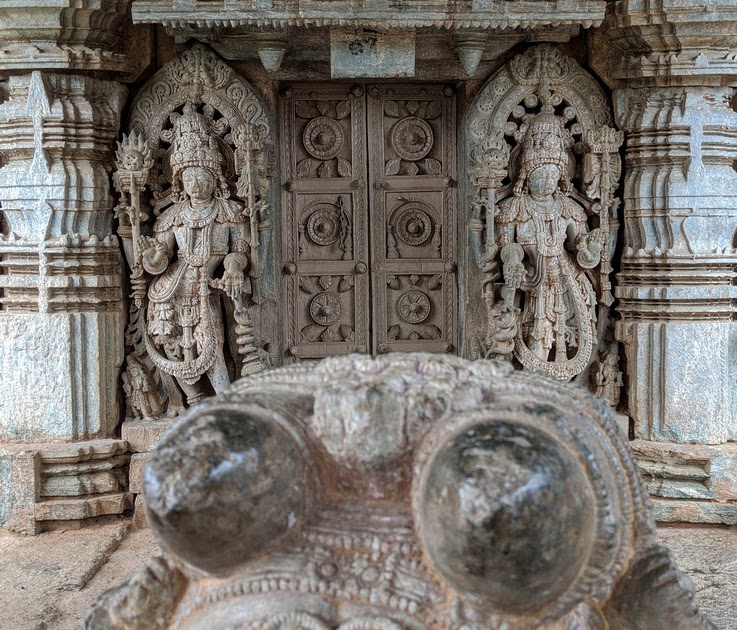 It is an offbeat Hoysala temple gem just three hours from Bangalore. This 13th century temple is one of the rare surviving Panchakuta temples from the Hoysala era. The famous sculptor, Ruvari Mallitamma, is known to have made contributions to this temple. I am talking about the Panchalingeshwara temple located in the village of Govindanahally in south-interior Karnataka. 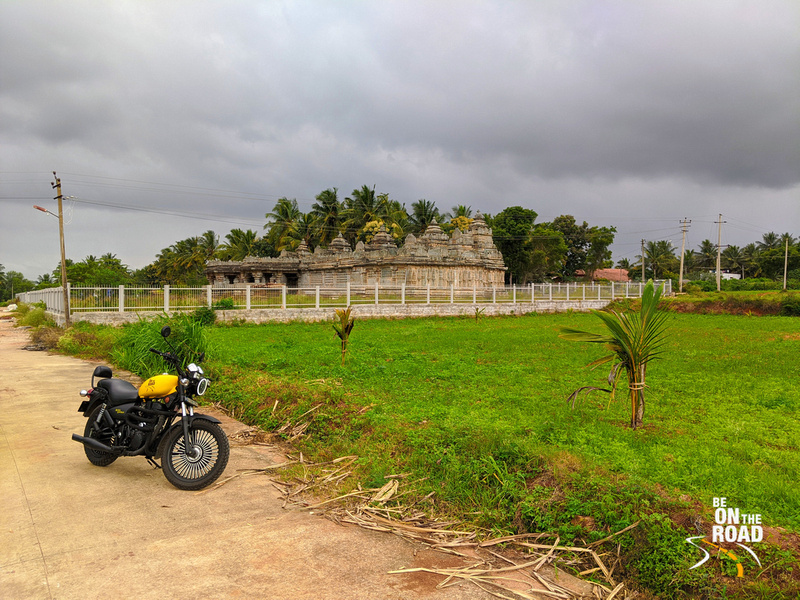 Set in a sleepy little village called Govindanahalli, the Panchalingeshwara temple is surrounded by lush farmland and coconut plantations and located right in front of it is the Govindanahalli lake. Unlike other Hoysala temples, this temple is built directly on the ground without the pedestal and its outer walls are fairly simple and it does not have edge to edge carvings like the other Hoysala temples. There are carvings and sculptures, but not a whole lot. 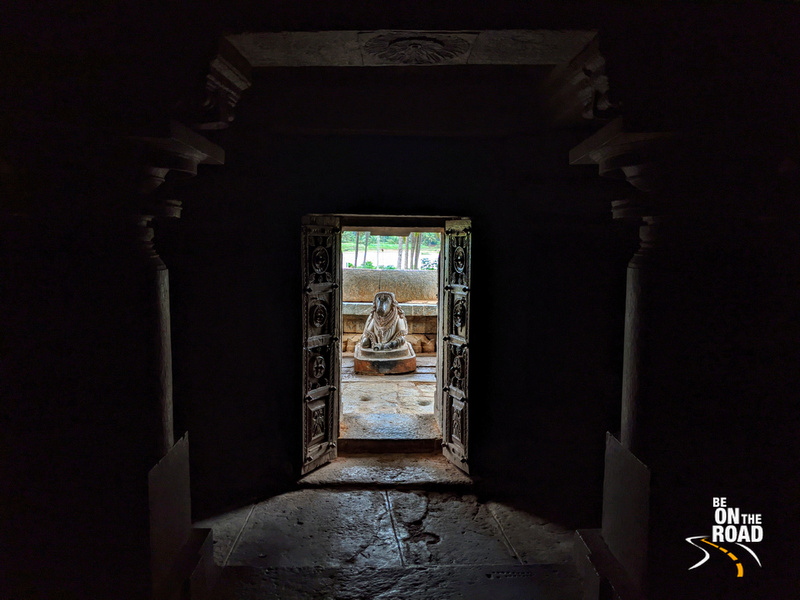 Facing east, it has five shrines dedicated to Lord Shiva that run north to south. The garbhagrihas (sanctum sanctorum) of all 5 shrines are connected to a common mantapa by a vestibule with sukanasi above. A long pillared hall connects the mantapa with two porched entrances whose ceiling are supported by lathe turned pillars. Each of these porched entrances have two intricately carved nandi statues. There are 3 other nandi statues inside the mantapa, but these statues are simple and plain. 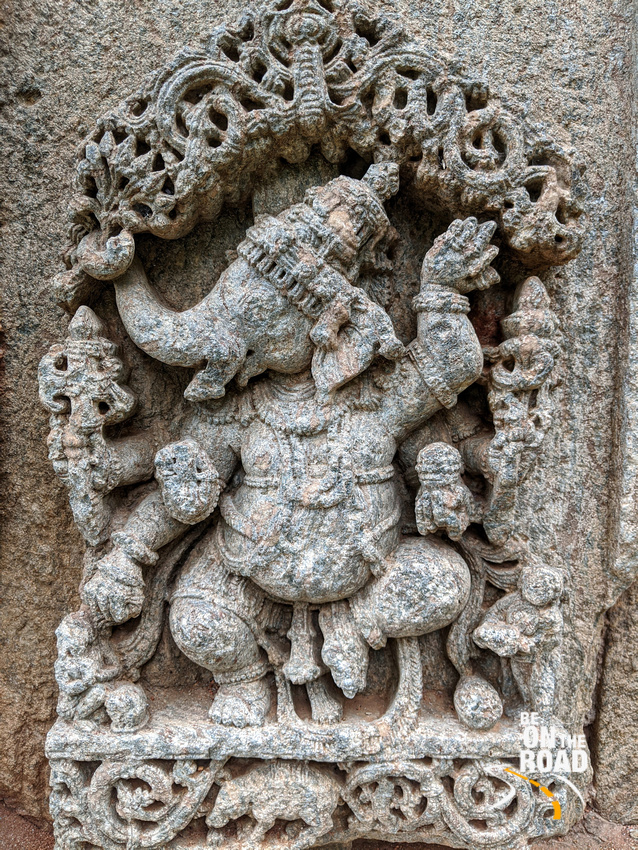 Apart from the eye catching Nandi statues, the porched entrance has 2 sets of beautifully carved dwarapalakas. These dwarapalakas stand tall on either side of the entrances to the mantapa, while the nandi stands opposite to them and faces the door. These dwarapalakas along with the carved nandi statues are the top highlight of the Panchalingeshwara temple at Govindanahalli. Inside the temple, each shrine contains one shiva lingam. These five different manifestations of Lord Shiva are called Sadyojata, Tatpurusha, Vamadeva, Aghora and Ishana. And you can also see carvings of Gaja Lakshmi at the entrances to the Garbha griha along with a set of low relief dwarapalas. In addition to the pancha lingas, one can also see statues of Parvati, Subramanya, Ganesha and Mahisasura Mardini housed in small gopurams on the outer walls of the garbha griha. 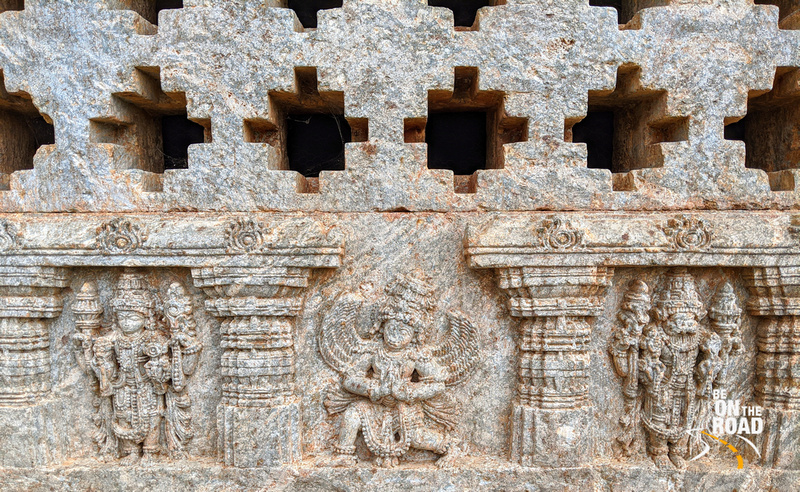 As with any Hoysala temple, the pradakshina at the Panchalingeshwara temple is also special. The Dashaavatar of Vishnu on the upper railings, dancing Ganesha, dancing Saraswati, Adiseshan Vishnu, Indra on his airavat, Lord Karthik on his peacock, Lord Krishna playing his flute, Brahma, Vamana avatar, trivikrama, Ravana lifting Kailasha, Mahisasura Mardini and the large Varaha avatar are some of the key sculptures one can see during the pradakshina. 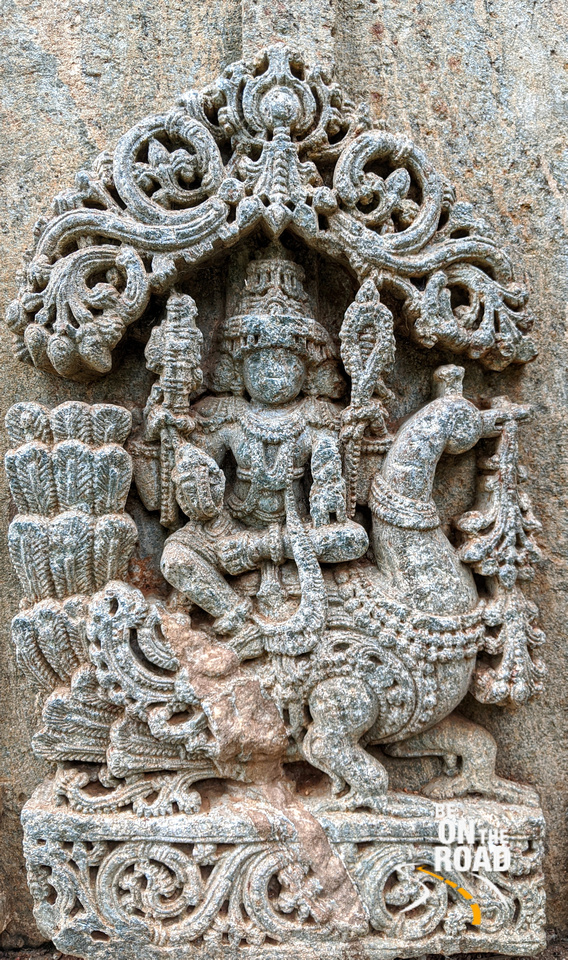 As you go on the pradakshinam of the temple, you will notice that each of the gopurams of the 5 shrines are different. You will also notice that the last shrine looks different from the other 4 shrines. May be, it was added to the overall structure at a later date. Compared to other Hoysala temples, this one certainly feels light when it comes to intricate carvings and sculptures, but it certainly has its special elements. 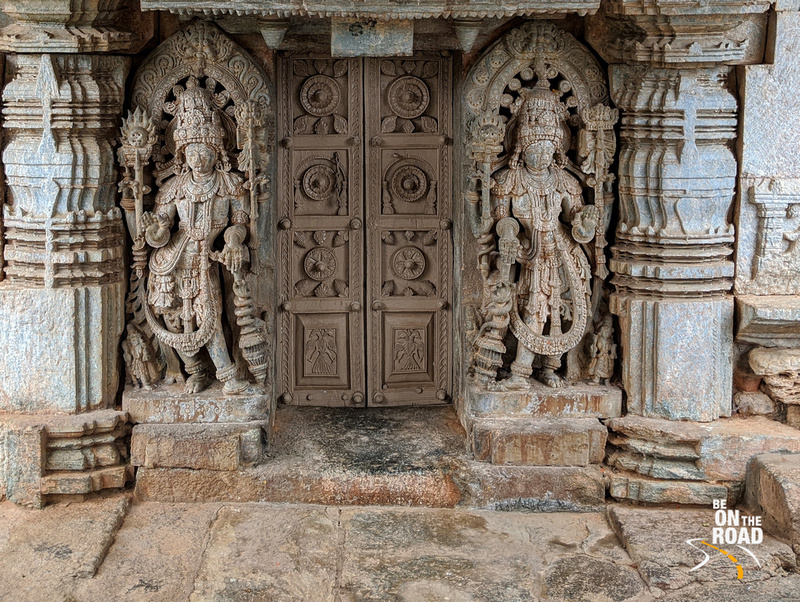 If you are one that looks for offbeat temples or you are one looking for hidden day trips from Bangalore, then you will certainly enjoy the Panchalingeshwara temple at Govindanahalli. It’s rural atmosphere, its serene temple campus and its Hoysala era creative gems are bound to captivate you. I would definitely recommend this Panchakuta temple from the Hoysala era for an offbeat day trip from Bangalore. And while you are here, do make sure that you visit the other lesser known Hoysala era temples in the vicinity. 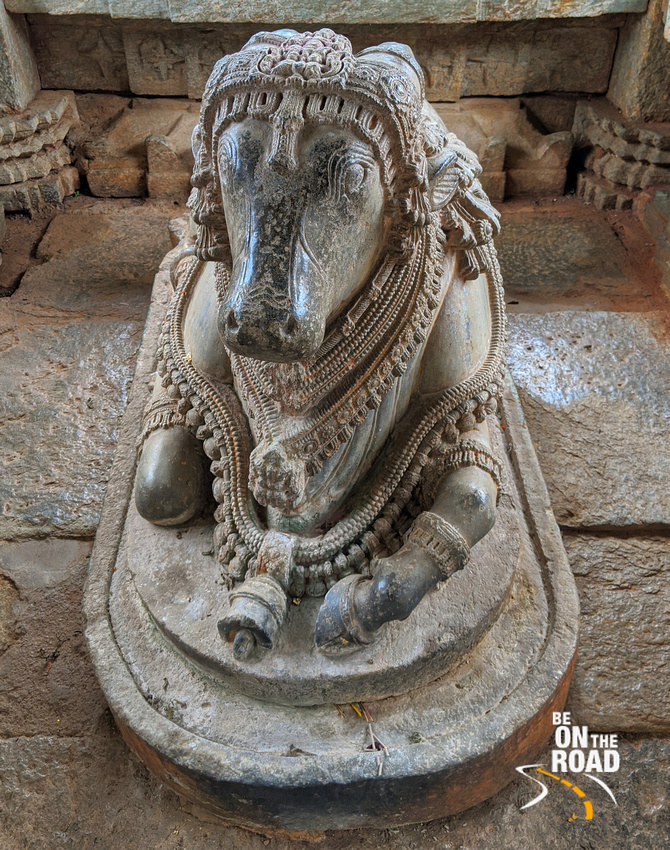 The Panchalingeshwara temple at Govindanahally is open and accessible all year round, but it looks its most beautiful self during the rains and right after it. This is when the lake opposite the temple carries water and the surrounding farms and plantations look lush and green. 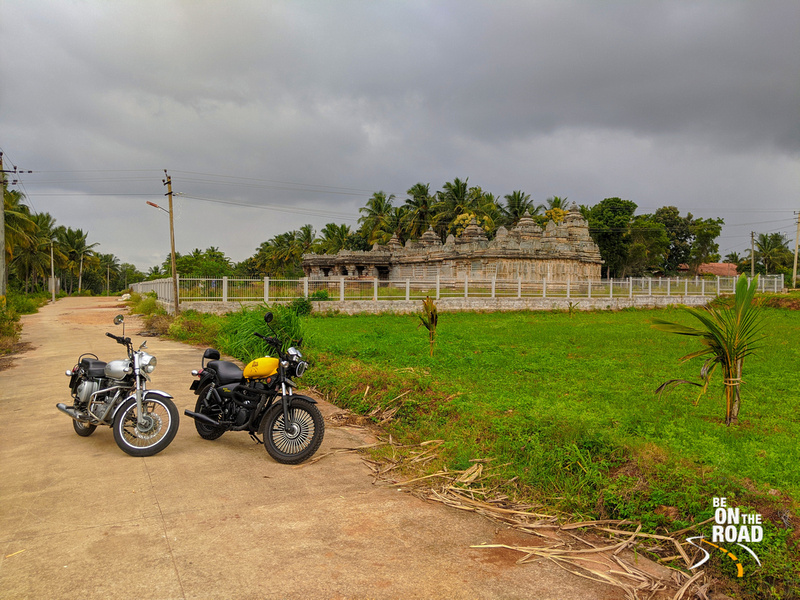 The temple is open from 8 AM through 6 PM. ASI staff are present at the temple premises. In case, the temple gate is locked, do look or ask around for the ASI staff.

The ASI staff will also act as a guide for you. 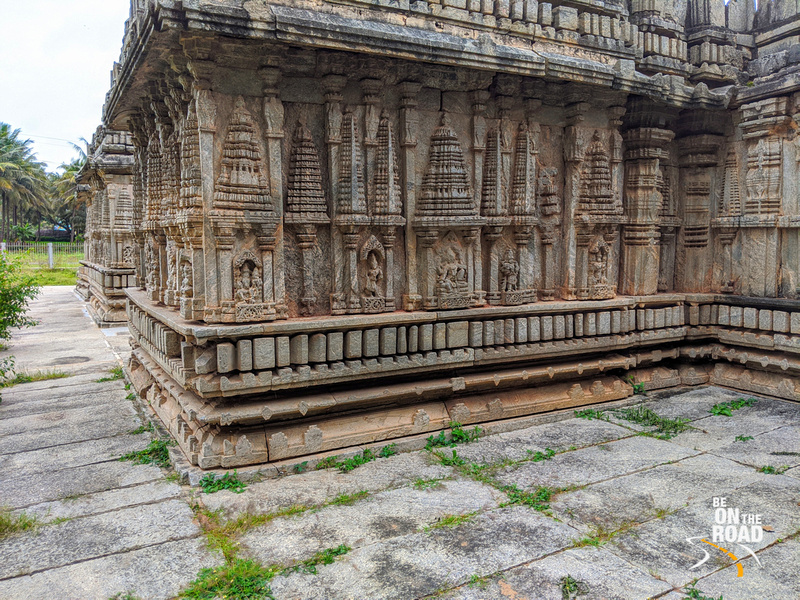 One can take either of the two routes to reach the Panchalingeshwara temple at Govindanahalli. Both routes are more or less of the same distance, but the one via the Hassan highway is bound to be a bit faster.

If flying, Bangalore would be the nearest airport and if traveling by train, the nearest railway station would either be Mysore or Hassan. 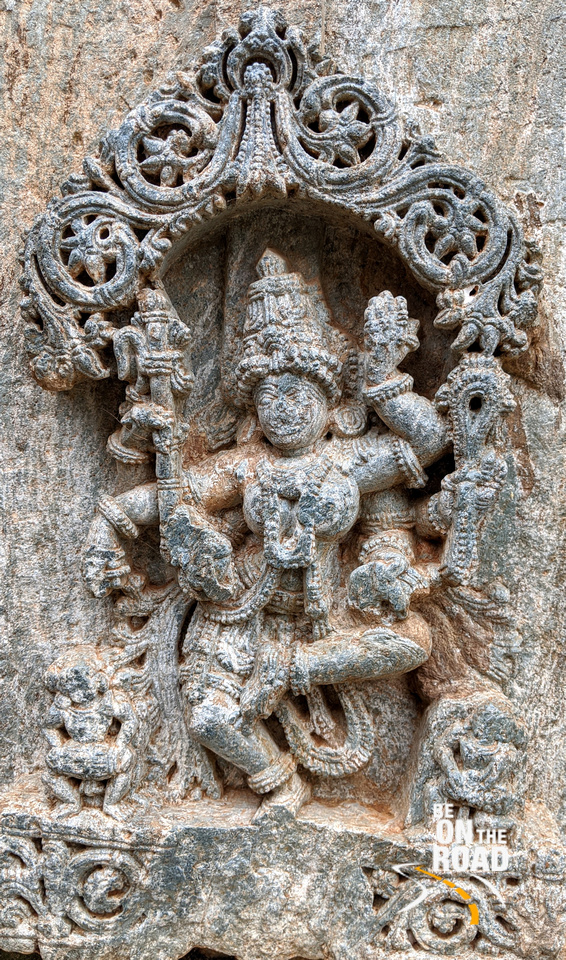 The closest place to stay would either be KR Pete or Channarayapatna, though accommodations can be basic.

If you prefer resorts, head to Hoysala village resort near Hassan or opt for luxury properties near Chickamagalur.

If you prefer reputed hotels, head to Mysore or Bangalore. 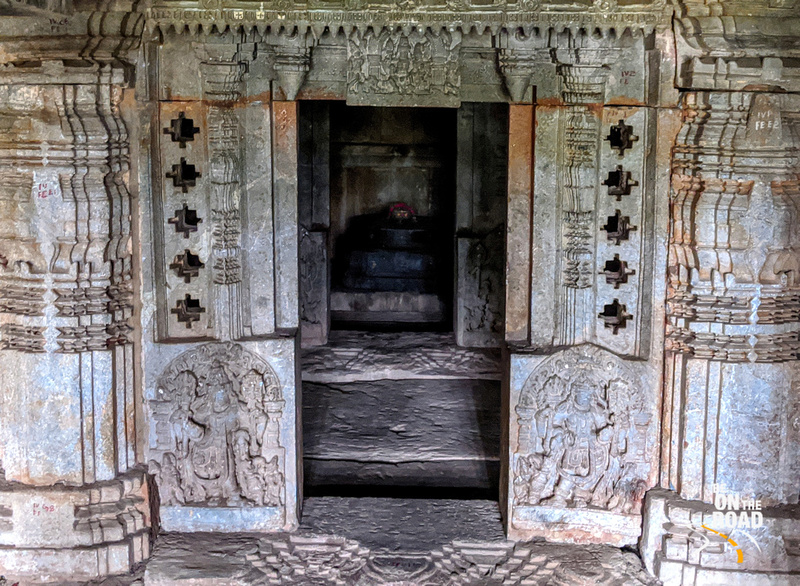 The nearest place to eat would be Krishnarajapete. There are a few good restaurants serving meals and snack items.

If you are traveling via Mysore highway, you can try the many restaurants on Mysore – Bangalore highway.

If you are traveling via Hassan highway, you can either eat at Channarayapatna or the restaurants on the Hassan-Bangalore highway, especially the ones near Hirisave and Yadiyur.

Other offbeat Hoysala temples nearby: 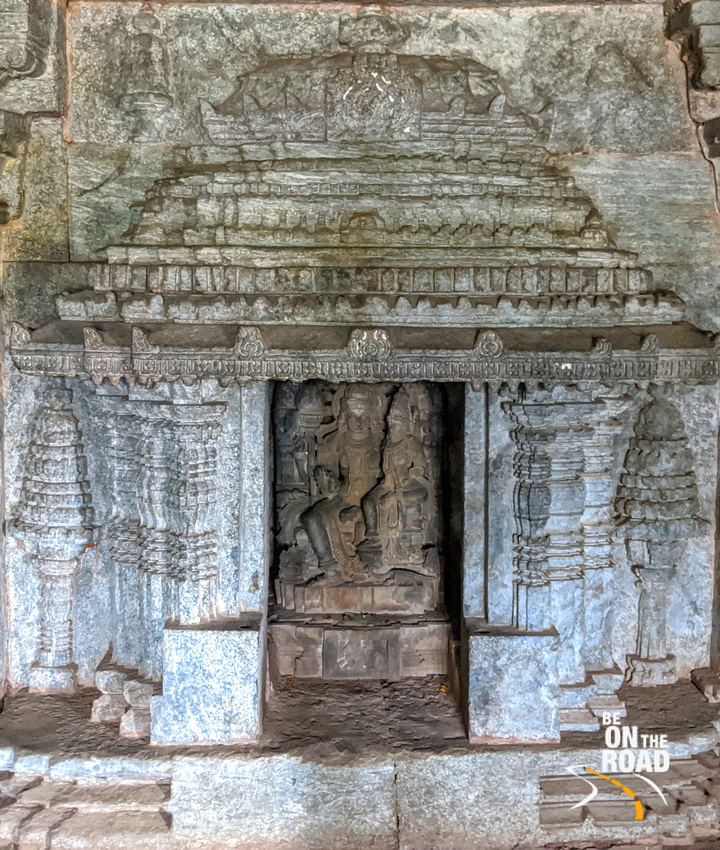 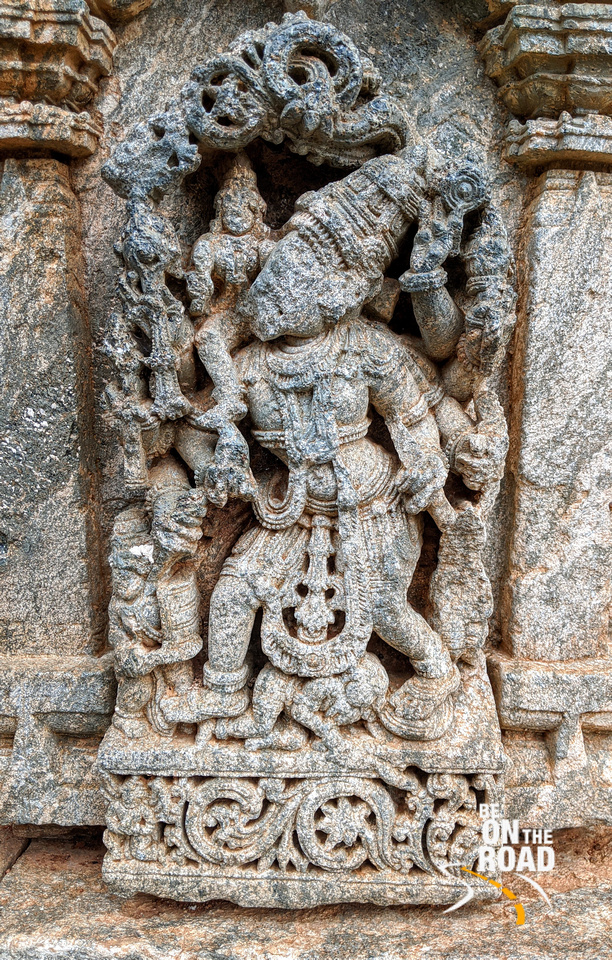 1) The temple town of Melukote

4) The riverine island and temple town of Srirangapatna

5) The Jain pilgrimage town of Shravanabelagola

6) Ranganathittu bird sanctuary on the Cauvery

7) The Incredible world of toys at Channapatna