Top Things To See and Do in Leuven, Belgium 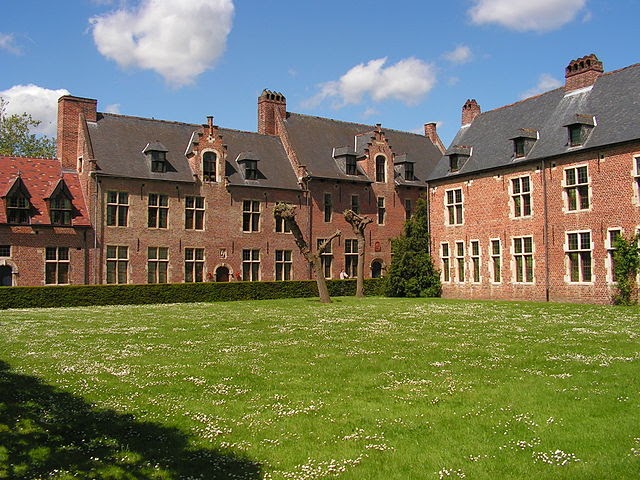 Belgium ‘s compact size offers eager travelers an attractive advantage: it’s relatively easy to explore different cities within the country in a relatively small amount of time. Brussels, its charming capital, is a must-see, but there are quite a few other cities and towns that you just have to discover as you travel across Belgium. Gent, Brugge, Liege or Namur are some of them but today we invite you to learn all that you can see and do in Leuven, capital of the province of Flemish Brabant and home to the Katholikeke Universiteit Leuven, the largest and oldest university of the Low Countries and the oldest Chatholic university still in existence.

Despite Belgium having a superb public transport system, nothing beats the experience of driving from one place to the other, stopping wherever you feel like it and staying for as long as you want in each place. Yes! Renting a car and road tripping this small European country is a great idea! American tourists can even do all arrangements before even leaving for the airport and look into the different and reliable options available for a safe drive.

Leuven is a good starting point if you’re interested in exploring other historical cities of Flanders. Did you know that it’s also the birthplace of several beers and that it has a rich (and tasty) beer culture? Located just 25 minutes away by train and around 40 minutes by car from Brussels, you can’t miss this walkable and bike-friendly city. You’ll fall in love with its great restaurants, one-of-a-kind boutiques and the young and hip atmosphere that the university provides.

Stroll the Grote Markt and the Oude Markt 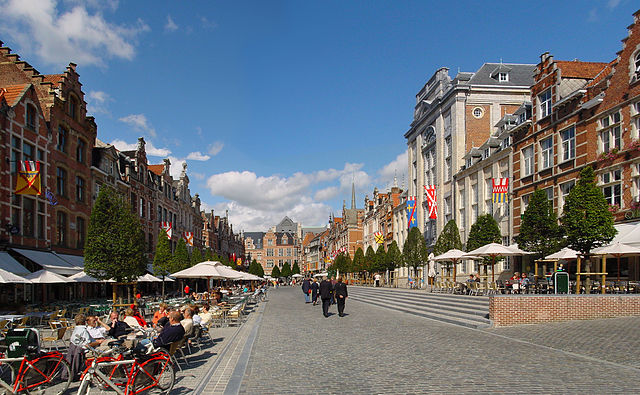 Known as the Grand Place and Old Place, these open squares are probably amongst the first two places you’ll see in Leuven.

The Oude Markt is centrally located just off the Grote Markt. During the academic year, it’s the heart of student nightlife and it offers plenty of restaurants, bars and cafés. It’s a pedestrianized area surrounded by beautiful buildings. With so many eateries, it’s known as the longest bar counter in the world! The area hums with a vibrant energy, especially during the warm weather months when students and locals flock to the tables to have a good time.

The Grote Markt is Leuven’s main square and where you’ll find the city’s most important buildings such as St Peter’s Church or the Stadthuis. It’s a splendid open area with remarkable old buildings that are definitely worth visiting. 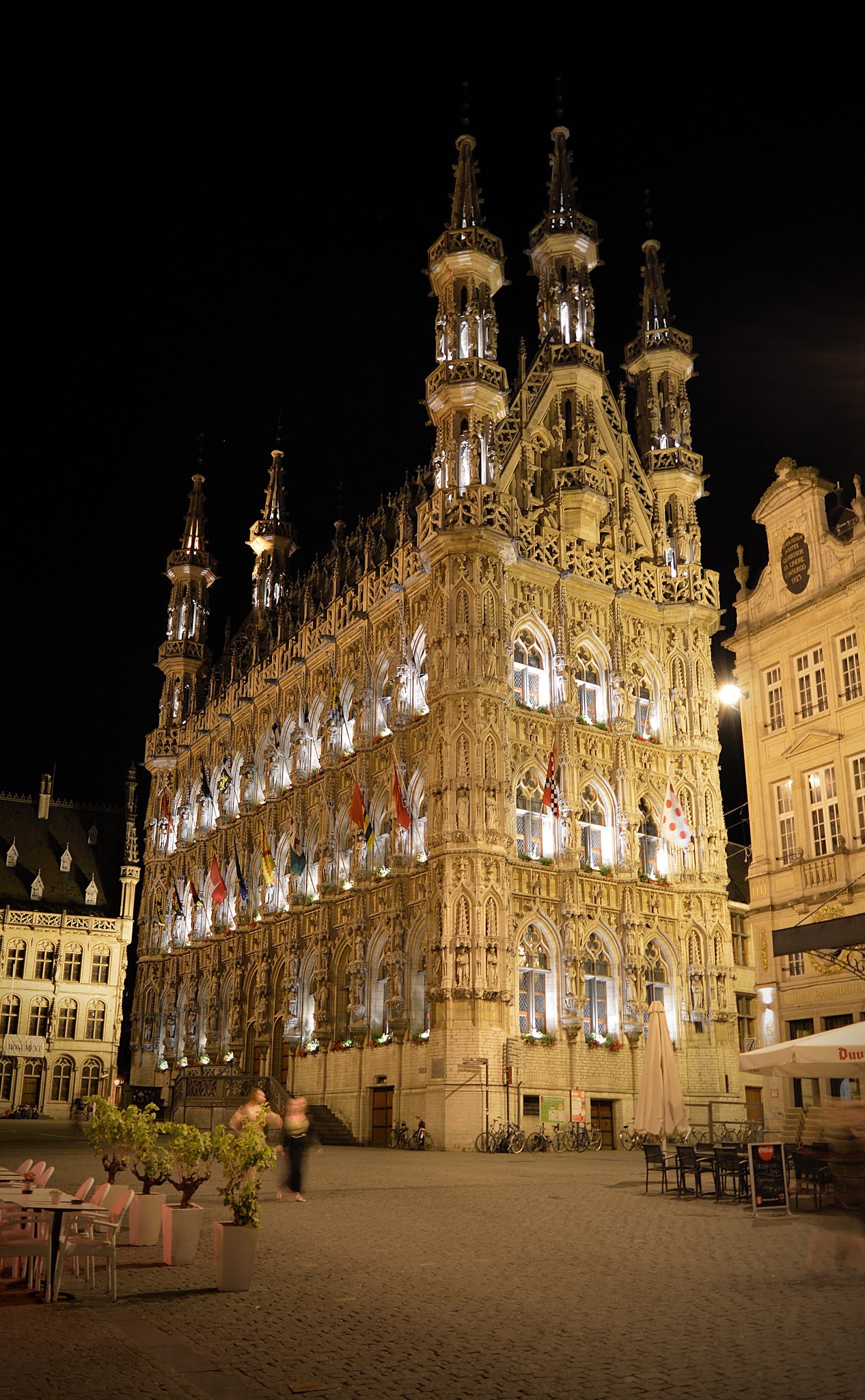 The Stadhuis or Town Hall in Leuven is one of the most beautiful ones in Europe and a landmark in the city. It’s located in the Grote Markt across from St Peter’s Church. Built in a Brabantine Late Gothic style between 1448 and 1469, it stands out because of its ornate architecture and for being crafted in lace-like detail.

The building is absolutely impressive. It has four corner turrets, two ridge turrets and there’s a balustrade around the building. You will also see a few hundred statues in niches around the building that represent biblical figures, prominent citizens, artists, judges, scholars and members of the nobility. If you pay close attention, you’ll be able to spot an image of Napoleon!

The inside of the Stadhuis is equally stunning. There’s a waiting hall on the ground floor, a gothic hall and salons. All of them are exquisitely decorated with wood carvings and paintings that depict mostly religious themes. 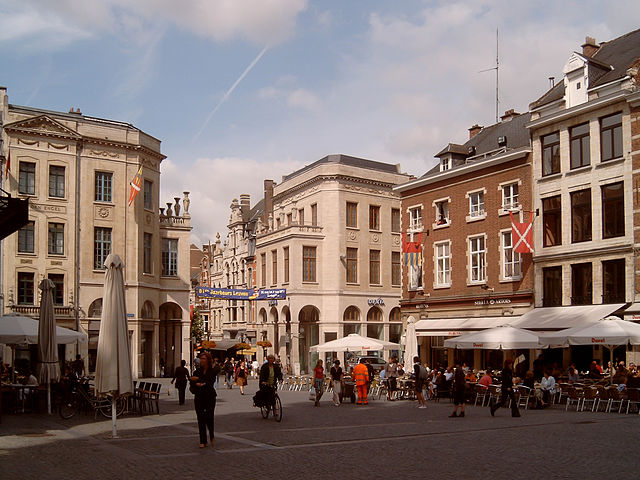 Sint-Pieterskerk stands in the middle of the Grote Markt and it’s one of the best examples of Brabant Gothic architecture in Belgium. The main nave stands out because of its straight line of sheaf pillars and high-pointed arch windows. Here you can also appreciate the late Gothic brass font in the chapel, to the left of the west gate, and the wonderfully carved Baroque pulpit of 1742.

The old chapels surrounding the nave contain an interesting selection of XV and XVI painting and sculpture, which is overseen by M-Museum Leuven. Amongst the highlights in the collection there are two of the most famous masterpieces of Dieric Bouts: The Last Supper and The Martyrdom of St Erasmus, which are exquisitely painted to detail. The paintings are located in the Treasury of Sint-Pieterskerk.

Sint-Pieterskerk is one of the must-sees during your stay in Leuven.

Enjoy Learning at the Central Library of the Catholic University 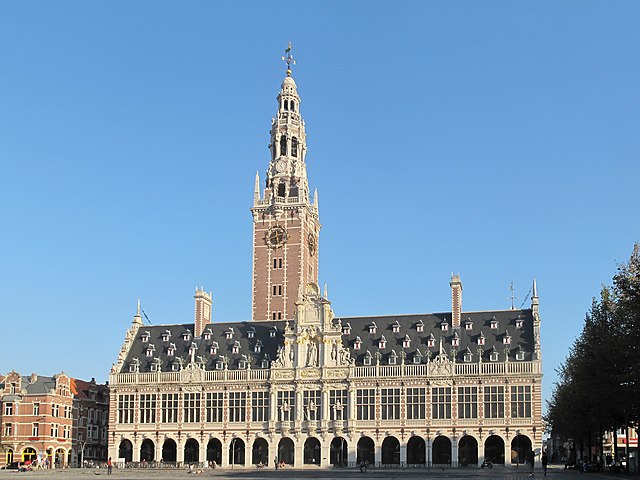 The biggest attraction in Leuven is probably the Universiteitsbibliotheek or University Library. It dominates Monseigneur Ladeuzplein and it stands out as a grand Flemish-Renaissance-style palace that features a soaring Scandinavian-style brick tower topped with a three-storey octagonal stone cupola. It burned down during both WW but it’s now fully reconstructed, operational and offers visits to the public. The admission ticket includes access to the bell tower, which of course offers magnificent panoramic views of the city. However, climbing up those narrow winding staircases is not for the faint-hearted! Keep in mind as well that this bell tower is still working so it rings every hour. When bells go off they are loud and shake the whole tower and, for some, it’s definitely not the most pleasant experience when you’re 80 meters above the ground! If you’d rather stay on ground level, you can admire its impressive reading room. 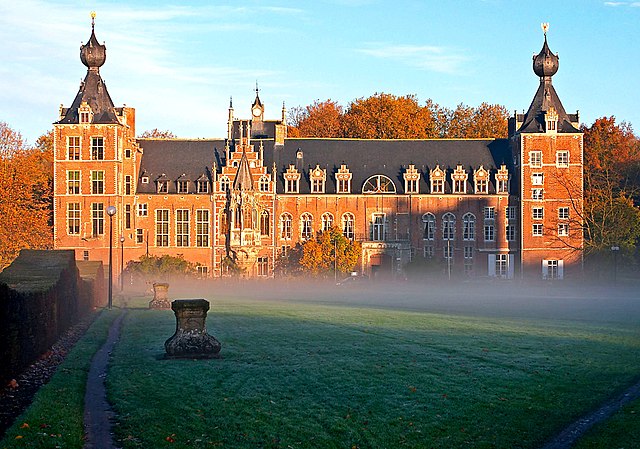 Leuven’s Groot Begijnhof is nothing short of impressive. Now a UNESCO World Heritage Site, with about 3 hectares in size, 300 apartments in almost 100 houses, it is one of the largest remaining beguinages in the Low Countries. It stretches on both sides of the river Dijle, which splits into two canals inside the beginage thus forming an island. There’s a bridge connecting the parts of the beguinage. Now, it’s owned by the University of Leuven and it’s used as a campus mainly for housing academics.

The Groot Begijnhof dates back to the 13th century when it served as a home to women who had taken temporary vows of chastity and obedience but were nevertheless free to leave any time. More prosperous beguines had a private residence while poorer ones lived together in community houses.

Take your time to explore this quiet and charming area of Leuven. Stroll the little alleyways and cobblestone streets and let the peaceful atmosphere transport you to a past era. You’ll love strolling about this idyllic village-like corner of Leuven. It resembles an ideal film set for a medieval drama! The lantern-lit cobbled streets are lined with step-gabled brick houses with stone window frames. 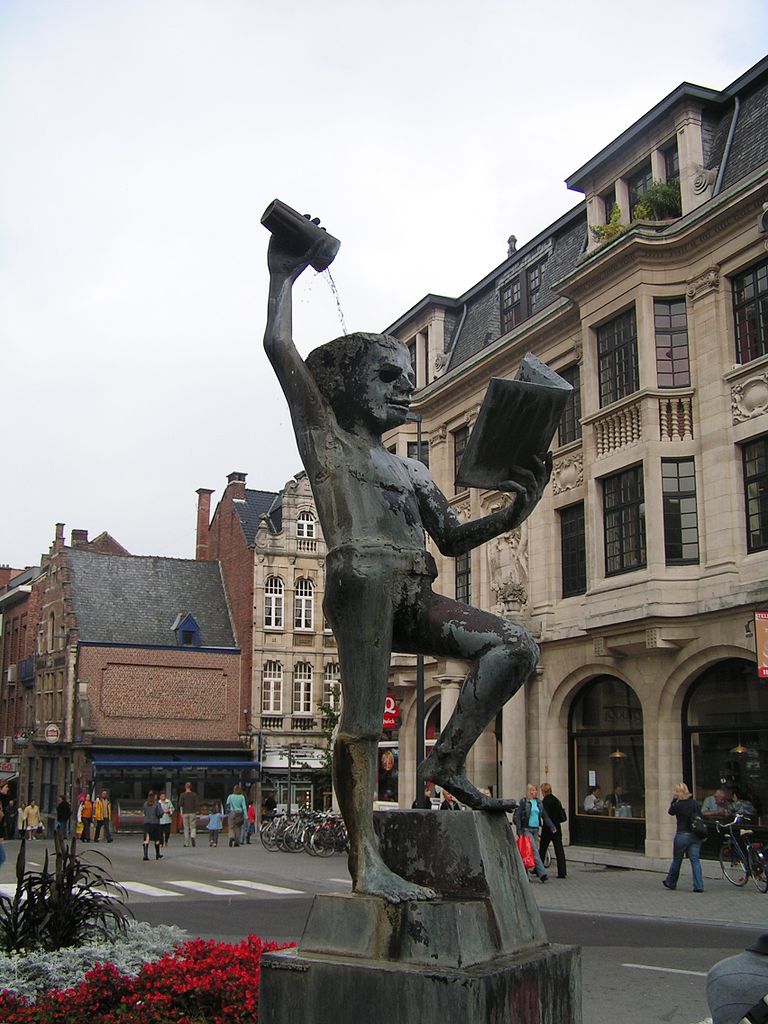 Compared to the Groot Begihnhof, the Klein or Small Begijnhof is really small: only one street of which used to be a larger area around the Sint-Geertrui Church and the Sint-Geertrui Abbey. Unlike the other one, this area looks like a working class neighborhood. You’ll see tall red brick buildings and smaller humble white-washed houses as well. In old times, around 100 women lived here. The infirmary was restored in 2000 and around 30 Flemish houses remain. 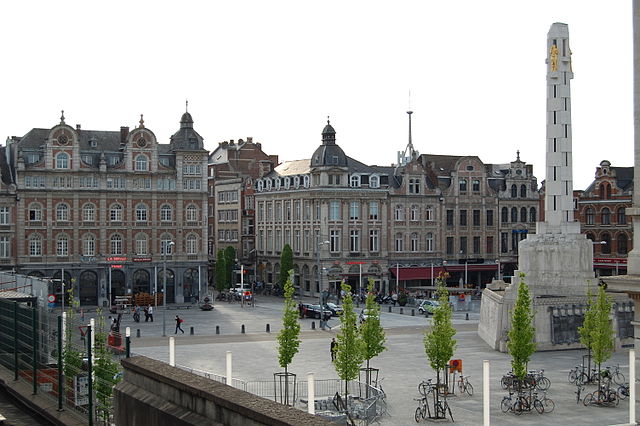 If Belgium is a great place for a beer, Leuven is extra special as it’s home to Stella Artois Brewery. If you can’t tour Heineken Brewery in Amsterdam, don’t miss the chance to visit this Brewery now that you can.

Stella Artois is one of the oldest beers in the world and the brewery offers guided visits. The building is only a 15 minutes walk from the train station. There are English tours offered on Fridays, Saturdays and Sundays but please check for the most accurate information. After the tour, you’ll be able to taste Stella Artois beer and you can also purchase some gadgets, beers and souvenirs to take home.

Admire Art at the M Museum 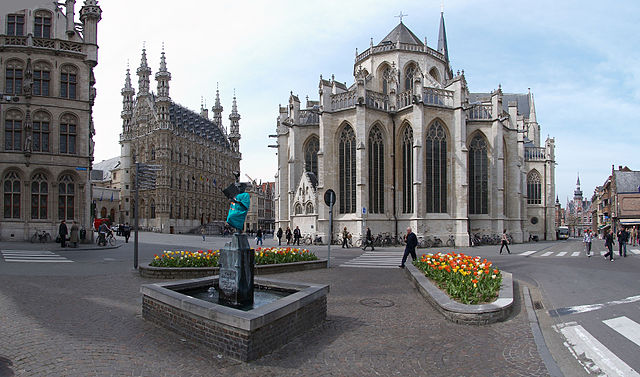 Established in 2009, the “M” Museum is essentially the history of the city museum. Located in the centre of Leuven, this beautiful building will immediately catch your eye. The complex integrates existing historical buildings with contemporary architecture. It’s home to a superb collection of documents, paintings, artefacts and costumes and from the room of the museum you have a splendid view of the city.

Built on the site of the former Vanderkelen Museum, the M Museum includes the contents of this municipal art and craft collection as well as a wide range of classical and contemporary art from around the world. The museum includes more than 52000 objects including paintings, photographs, sculptures, glasswork, engravings, ceramics, textiles and metalwork.

Note: The pictures in this article are courtesy of wikipedia.org and have been borrowed under the creative commons license. Each picture has been linked to its host page on wikipedia.